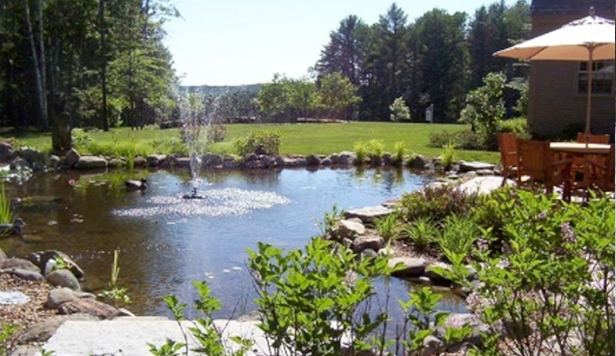 The dream of living on a mountain top became a reality. The trees were cleared and the area levelled in order to create a cozy cape with attached barns for a homeowner that loves to tinker inside and out. Once the house was well on its way our designer collaborated with the owner as to the overall look and feel of the landscape. The patio and pond were set to the back of the house for the homeowner’s enjoyment, but was still visible as one came up the hill.

Construction began with the pond and patio as each was an integral piece of the other. A dry stack fieldstone wall was built along the driveway at the top of the hill beckoning visitors to enjoy the simple lines of the house and gardens imbued with “Ole New England” charm. Planting began with perennial color being added to patio insets and repeated in the gardens surrounding the pond. A flagstone walkway winds through a new birch planting to the front door. Rhododendrons were sprinkled along the new woodland edge.

Watering the vast lawns and planting beds became the task of our irrigation division and they were very much a part of the planning and implementation of the entire project. Lighting was added as a finishing touch to highlight the birch, pond and specimen plantings against the house. The simplicity of the setting drove this landscape to its serene and colourful best.